I’m still planning on using a Garmin nuvi 1450 for my primary route navigation. 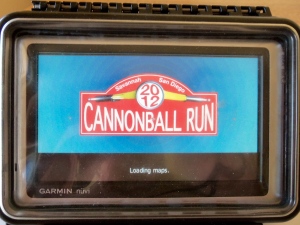 nuvi 1450 starting up in the Aquabox

It will be connected to a switched DC power source in the custom electrical system, and should be able to continue operating with power from the stator only if the battery portion of the system should fail.

Each leg is entered separately, but I still need some practice making on the run corrections to the planned route. There is a local test route loaded for that purpose.  This particular unit has traffic information capability, but until we get to San Diego that should not even be a player.

Garmin is considerate in that they also provide turn by turn visual instructions to go with the voice instructions.  Since the 1450 will be in a Aquabox for weatherproofing I won’t be able to hear the voice instructions so that feature could come in handy.  In addition they provide a listing of the turns on a separate page.  As I’ve mentioned, I’ll also have the official route information provided by the organizers, and my own paper maps courtesy of AAA.  As a final back up, there will be the iPhone, but the screen is just a bit on the small side to be that useful without stopping and working the zoom feature.